Teaching Virtue: The Dot and the Line

In the cultural wasteland of the ’70s, where peace and love had degenerated into sex, drugs and rock ‘n roll, precious few lights beckoned to youth who met license, pornography, and drugs everywhere. Yet Providence did not wholly abandon us. From time to time, I remember some of those suggestions of a more beautiful life that eventually led me to cry for grace. Thanks to today’s technology, I can often quickly find books or music or movies that I think had a salvific influence on me and share them with my own children. 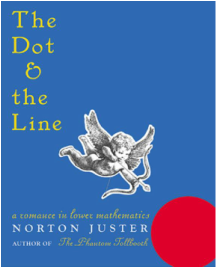 Recently I re-discovered one of those, a 1965 Chuck Jones movie short called “The Dot and the Line: A Romance in Lower Mathematics.” Not only do I still enjoy it, but I have begun to use it for workshops with Catholic educators to help them understand a concept key to Catholic education: virtue.

The animated version of an original Norton Juster tale features a straight Line in love with a Dot. The Dot has no interest in the boring, stiff Line, preferring the company of a jazzy, fun-loving Squiggle. The Line remains in love, rejecting the advice of his fellow-lines to settle down with a nice sensible straight line. After day-dreaming himself into sickness, the Line finally decides he has to change himself in order to win the Dot’s affections. Months of effort are rewarded when he finally learns to form an angle. Refusing to “squander his talents” by following the chaotic lifestyle of the Squiggle, the Line trains himself to form the most elaborate and beautiful of geometric figures, a talent that allows him to express the “inner, passionate me.”

The presentation of the Squiggle resonated with me. Although I had no words to express it, I was grateful that the Squiggle’s liberty = license lifestyle was seen as ugly, uninspiring and finally insipid and boring, coinciding with my natural distaste for those who trumpeted sex and drugs as freedom and progress. Not that I wasn’t attracted by those things myself, but I knew that I wasn’t doing anything morally great in the process. I instinctively, deeply rejoiced when the Line rejected wasting himself in that manner.

I also loved the importance of beauty. Being a romantic daydreamer like the Line, I needed to be in love with something or someone beautiful. Although I never had much use for the Dot (completely superficial as I deemed her to be), I admired the Line’s devotion to her beauty.

And that devotion made him beautiful. He would not settle for the commonplace, the ordinary, the merely expected. The “sensibility” of the straight line society suggested everything of superior self-contentment, moribund in its temporal and collective self-satisfaction. The Line’s love could never be content with the blandness of simple conformity.

But the story also reveals the vast distance between desire and reality. The Line’s fantasies of being admirable were empty. He had to make himself really beautiful. He poured himself into it; he studied, he practiced, he developed. Returning to the story after a half-life devoted to theology and philosophy, I realize now that the Line was following Aristotle’s and St. Thomas Aquinas’s formula for the happy life––pursue the noble or beautiful by clumsily imitating noble actions over and over until one becomes graceful in their execution and they become more elaborately admirable.

What the Line inspired himself to do, Catholic schools are meant to inspire their students to do. God gives each of his children raw talents or capabilities that need to be developed by exercise. Some are physical – strength, speed, grace. Some are cognitive––observation, memory, imagination, wondering, planning, understanding. Some are affective––love, confidence, courage, perseverance. As the Catechism (1804) teaches:

Human virtues are firm attitudes, stable dispositions, habitual perfections of intellect and will that govern our actions, order our passions, and guide our conduct according to reason and faith. They make possible ease, self-mastery, and joy in leading a morally good life. The virtuous man is he who freely practices the good.

Children need to be inspired, encouraged and directed to exercise these powers so that they might develop into full human beings and adult members of the city of God.

For various reasons, secular education neglects children in their personal development in favor of improving test scores to increase chances of getting into colleges that will lead to higher-paying jobs. The natural and supernatural talents of children that go through the system languish.

Catholic schools must not follow their secular counterparts in their educational approach. They must surround their students with the noble, the beautiful and the true in all areas of the curriculum and the academic environment, encouraging them to become like what they see. As the Catechism (1803) suggests, quoting St. Paul:

The Line, through his dedication, made himself worthy (and more than worthy) of his love. We can help our students to make ourselves as much like our Love as possible.