One should expect to learn a lot about a school through the quality of its valedictory addresses. What do its best students speaking at the most important event of their lives to date want to share about their experience? What made their time at school memorable? What do they look forward to in the future?

For the past decade, our Institute has worked with Catholic schools around the country that are committed to living out the Church’s ideals of education. These schools usually started with these ideals and little else. Thanks to the Holy Spirit working through them, now they provide inspiration and a wealth of experience to those looking for ways to make their schools more Catholic. The following excerpts from a half-dozen speeches from three different high schools give remarkable insight into the character of the speakers and many of the elements that have made their schools successful.

Jane Forsyth, St. Augustine Academy, Ventura, 2007:  We Were Shaken by These Books

Our class has always loved English. We have been privileged to read many great works of literature, and our discussions of them have been lively; often they carried on after class. But among all the years of English classes, this last year, especially this last semester, stands apart.

We began the year in much the same vein as past years, reading two works that, though they had little in common with one another, were nonetheless elevating and magnificent: Willa Cather’s Death Comes for the Archbishop and Shakespeare’s Much Ado About Nothing.  The second semester was different: we began with All Quiet on the Western Front, an agonizing story of a hopeless young man in the trenches of World War II who dies abandoned and disappointed by those in whom he had put his trust. We next read The Great Gatsby, a tale of decadence, betrayal and disappointment set in the 1920’s whose theme is the illusory and unattainable nature of man’s innate desire for happiness and goodness. This work was followed by Steinbeck’s famous The Grapes of Wrath which, through its twisted use of Biblical allusions and socialist propaganda, challenges Christianity, setting up a system of belief founded on human beings and manifested by a communist ordering of society to merely natural goods.

We were all shaken by these books, so unlike any we had read in our many years at St. Augustine Academy. Their darkness and despair dampened our spirits, and their utter Godlessness was shocking and disturbing. Our souls rebelled against these works; and we realized all at once that everything we had been taught about the nature of man and the goodness of God had taken root within us.

We closed the year with Evelyn Waugh’s Brideshead Revisited and a peek at Flannery O’Connor’s short stories. These, too, dealt with decadence, ugliness, and sin. But they did not leave us with a bad taste in our mouths. Their steadfast hopefulness contrasted sharply with the despair of the other works we had read. They acknowledged the problems with fallen man and with the world, but then pointed to God as the one who can solve these problems.

​These works struck a chord in us, teaching as they did that, to be sure, evil does exist; that a battle is raging between Satan and God; that the battleground is our souls; that the battle is to the death; but that, in spite of all this, we have nothing to fear because Christ is our Great Captain who will win the victory with us. Indeed, He has already won: by His Passion, Death, and Resurrection, He has bought us back from the devil and made grace, that necessary help of God, available to us. And if we open the doors ever so slightly, that grace will flood our souls. 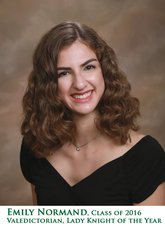 a glimpse of eternity –whispering that we do not live in a hopeless world, that there is a difference to be made. It is this mystical beauty in the world we live in where people like us can most readily encounter a sense and certainty of something transcendent.  We grip hold of those beautiful moments, because we want to live for something, we place our hope in that something outside of ourselves–we have a hope that we are living for something more than just the mundane and often empty here and now.

Now is the time to take the blessings we have been given and turn them into something fruitful. So, Class of 2016, this is my final address to you, when you wake up one day, wanting more–thirsting for something True in this beauty-deprived, surface-level, and sugar-coated society, drowning in the very lifelessness of its people…start with Christ, encounter the living Truth, and never let Him go.  This is the most important thing I can tell you.  There is Truth, go out and find it–and with that Truth, make a difference.

We, talking around the table, were hooked at some point. We were each caught and enslaved by wonder: Did Socrates commit suicide? Was it morally permissible for Odysseus to kill the suitors? Can music be morally good or bad? Is the part really ordered to the whole? What is really the difference between piety and

religion? Is one a number? We had to know, and we could not really be at rest until we did.  What we really must fight for was Truth, to defend it and to reach it ourselves. And Truth, we knew, was God! This Truth, this wisdom that Socrates loved, and that we were beginning to love, was our own Lord in whom we had always believed; and the same God that we had always known by faith, we now began to see by reason. We saw another manifestation of St. Augustine’s declaration that “My heart is restless, Lord, until it rests in Thee!” Lewis says that friendship must be about something , that a shared love of some truth is the basis of friendship. Because of the Lyceum, and because of those shared classes and common experiences, I have been lucky enough to find friendships with you, my fellow students, that are based, imperfectly for now, on the love of God who is Truth. What a wonderful thing to unite friends!

When I think of The Lyceum now, it is sort of mixed up with Michelangelo and Beethoven and the Iliad and Sicut Cervus. And that is sort of what The Lyceum is: a bringing together of everything beautiful and great and noble and holy. A sort of proving that all of these are what is truly real in the world. That men are only fitted to noble and great things.

We have undergone to some extent a transformation, from beginning at The

Lyceum until now, small in comparison to the transformation which is our life-long duty, but of great import in our spreading of the Light of the World to those in darkness. “And God said, ‘Let there be light,’ and the light was made and the light shines in the darkness and the darkness did not comprehend it. And God saw that the Light was good.” 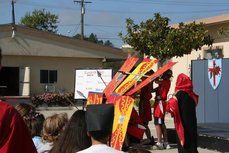 That’s what St. Augustine Academy is—that kind of rejoicing in good things. I could tell you a hundred stories, without adequately expressing what our experience at school has meant to me and to my classmates. All of our years here have been one tremendous experience of Truth, of Goodness, and of Beauty.  We are leaving the barefoot dances on the patio, the little kids flying paper airplanes, the choir practices, the guitar sessions, the morning assemblies.

None of us will forget what we learned here. We will remember our heated debate on whether the American colonies should rebel or not, and the time we tried to reenact the Trojan War on the soccer field. We will remember how we used to spontaneously break out into four-part polyphony during Latin, to Mrs. Krestyn’s mixed delight and despair. We’ll remember Mrs. Thomas impersonating Thomas Jefferson, and we will always remember Sister’s definition of sanctifying grace.

Our parents know—our teachers know—and our classmates know—that what brought us together was the pursuit of Truth and the love of a Person, Jesus Christ. And that we will always share, no matter how many miles separate us.

Elisabeth Seeley, St. Augustine Academy, Ventura, 2015: Our Teachers Showed Us How to Live

Our teachers are involved. They encourage us to be curious and not stop when we’ve found the answer to one problem but help us to move on to the next level of questions, whether they know the answers or not. Mr. Moore, thank you for always being willing to discuss the wacky parts of Physics that interested us most, even if they weren’t entirely on topic. Nothing dampens the intellectually adventurous spirit as much as being told that we’re not going to discuss something, interesting or not, simply because it’s not necessary to know for the test.

Our English teachers showed us how to find the hidden riches in poetry and literature, whether Romantic, classical, or modern. Our History teachers made sense of our crazy world by giving us perspective, connecting us to humanity throughout the ages. In Science and Mathematics, we unearthed the magnificence of God’s universe.

Finally, all of our teachers showed us how to live a life of Faith. And so, I’d like to encourage all the students we’re leaving behind — be engaged in your classes. It’s not silly or nerdy, though it may be unpopular, to care about what we’re being taught. On the contrary, it is childish to not care, to sit passively through six hours a day, 180 days a year. So many people struggle for years to find what we are being given — As Archbishop Chaput put it, we are being equipped as “saints for life in this world and the next.”

are devoted to their Catholic faith and seek to grow in it. Parents see the difference in an education that aims beyond college and career readiness. While Catholic education naturally includes such  preparation, it should reach well above its secular counterparts in order to inspire the young and set them on a path of lifelong virtue. These parents have found that in most schools their idealistic children will be unique, out of step, even weird. But in these schools, their children are honored by the institution and find that their ideals speak to the hearts of most of their fellow pupils.