Learning to Read the Scriptures

In his classic work on Scriptural interpretation, St. Augustine encourages students of Scripture to learn all the branches of knowledge necessary for understanding the holy word of God.  In a particular way, his advice pertains to what we would today 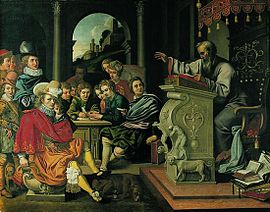 call literature.  Before his conversion, St. Augustine had been a literary man himself, being a master of rhetoric, who gave speeches to delight the Imperial Court, and a teacher of the craft to others.  He cut his literary teeth on Virgil’s Aeneid, and delighted in all the techniques of verbal craftsmanship to be found in the ancient writings.

St. Augustine found that Sacred Scripture used all these techniques in presenting the stories and doctrines of the Old and New Testament.  This gives a sacred importance to teaching the techniques of literary composition:

I would have learned men to know that the authors of our Scriptures use all those forms of expression which grammarians call by the Greek name tropes [“figures of speech”], and use them more freely and in greater variety than people who are unacquainted with the Scriptures, and have learnt these figures of speech from other writings, can imagine or believe….But this is not the place to teach them to the illiterate, lest it might seem that I was teaching grammar. I certainly advise, however, that they be learnt elsewhere….  On Christian Doctrine III.29

[restrict]
Beyond these grammatical devices, all the habits of good reading and literary analysis can make the reading of Scripture more fruitful — discerning an author’s intentions, recognizing literary allusions, tone of voice, character development, foreshadowings.

Of course, the Scriptures are not like other writings. For one, the stories read more like newspaper reports than novels.  We are told only of the external words and deeds of our characters; we learn nothing of their internal reactions or thought

processes.  For the most part, the narrator does not offer commentary on the significance of the deeds or words.  This minimal presentation requires even more attentive reading than we are accustomed to.  Readers must be active in noticing subtle changes, picking up significant words and expressions, asking why certain characters speak or don’t speak, do or don’t do.

The suggestion Sofia Cavalletti (The Religious Potential of the Child)  makes for young children applies to all ages:  the parables are a great place to start learning to read Scripture.  When reading the parables, we need to learn to pay attention to images and characters, and to see that much can be suggested by small details.
Every detail in a parable is significant, usually on many levels.  Helping students to see this in several examples can give them a taste for the profundity of Scripture that will stay with them for their whole lives.

For example, in the parable of the Prodigal Son, Jesus tells us, “But while he was still a long way off, his father saw him and felt compassion for him, and ran and embraced him and kissed him.”  How did the father in the story see him when the son was still “a long way off”?  He must have been waiting for him, looking out for him, hoping for his return, during the entire time the son had abandoned him, and was living in that far country.  And if the father in the story is an image of our Father in heaven, this image becomes one of the most poignant expressions of the His love for sinful men.

If the father is meant to be an image of our Father, why are there two sons?  What are these two sons like?  Why is it the younger one that leaves?   What is the wealth that is divided between them?  What is signified by the “journey into a distant country”?  On one level, we can see that living in sin is placing ourselves in a place that is far away from the loving relationship with the Father and His loving

household.  It involves squandering the wealth of talents and of personality that He has given us.  On another level, we might see the younger son as an image of the early non-Jewish Christians, whose conversion was not being fully embraced by the Jewish Christians.  The story ends with a deeply moving plea from the father: “‘Son, you have always been with me, and all that is mine is yours. But we had to celebrate and rejoice, for this brother of yours was dead and has begun to live, and was lost and has been found.’” (The 1977 miniseries, “Jesus of Nazareth” contains a beautiful presentation of the telling of this parable.) And Jesus does not tell us how the older brother responded, drawing in his audience to finish the story for themselves, both in their imaginations and in their own lives.

Learning to read the parables can help us to read other stories in the Scriptures.  It is a principle of Catholic scriptural interpretation that God Himself tells parables through the lives of the real men portrayed in Scripture.  The Gospel of John, for example, tells the story of the Wedding Feast at Cana.  An attentive reader will notice many puzzling details.  Why does Mary go to Jesus when the wine runs out? What does she expect Him to do?  Does she ever tell Him what to do?  What does she say to the servants?  The answers to these questions can reveal much about Mary’s character and her relationship with her Son.  But more than this, any wedding mentioned in Scripture should makes us think of the relationship between Christ and His Church, which is compared to a marriage in St. Paul’s famous passage in Ephesians 5.  On this level, we can think of Mary’s role in the Church as we consider the closing line of the story:  “This beginning of His signs Jesus did in Cana of Galilee, and manifested His glory, and His disciples believed in Him.”
The Church has always found innumerable riches in the stories of Sacred Scripture through employing careful, imaginative reading.  Religion and literature teachers in Catholic schools can help each other and their students to grow in appreciation for the Bible’s wealth.
[/restrict]