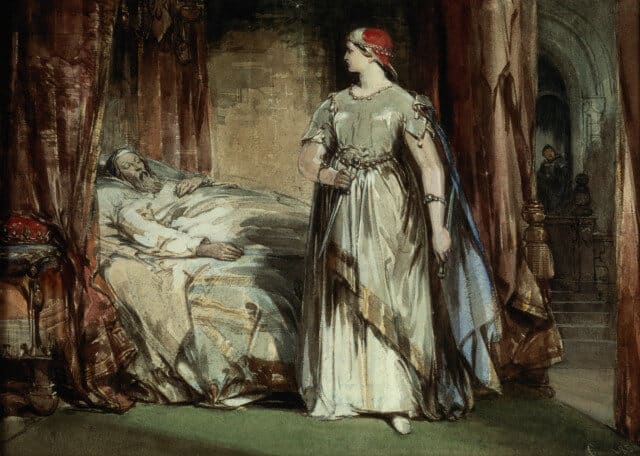 I love directing Shakespeare’s plays. Since the words mean everything in a successful performance, I am always faced with the challenge of interpreting every speech, every difficult passage, every seemingly insignificant scene. I delight in discovering the dramatic impact of different possible interpretations in practices with the actors. I assume that every word is pregnant with meaning, both in its immediate context and with respect to the whole, and I am nearly always rewarded. No word is without the touch of the artist, though it take patience and thought and trial to discover it.

This summer I didn’t direct, but I was given the opportunity to portray the Porter in Macbeth. The Porter’s appearance at the beginning of II.3 is a ridiculously comic interlude – the only comic episode in the play – that shockingly interrupts the tension-filled, gory portrayal of the murder of Duncan and its discovery. The drunken Porter comes on to stage with no break in time (the knocks that wrench “Wake Duncan with thy knocking” from Macbeth do waken the Porter), rambles on about hell, equivocators and tailors, then enters into a stand-up routine on drunkenness and lechery with Macduff as his straight man. When Macbeth enters, the Porter is no more heard from. For all of his nonsense, the Porter makes his mark: “I pray you, remember the Porter,” may be ignored by Macduff, but not by the audience.

Some say Shakespeare needed an interlude to give the actor portraying Macbeth time to get the blood off his hands and a costume change, and perhaps he felt it a good opportunity to momentarily relieve the tension of the play, so the words of the Porter need not have any deep connection with the rest of the play.  But this account goes against all my instincts as a reader of great authors and a devotee of Shakespeare. And if one can look past the comic presentation, the Porter’s explicit mention of Hell makes evident what the Macbeths have done to their beautiful castle: Lady Macbeth’s invocation of the demonic spirits has turned to Hell what Duncan and Banquo had admired as a castle wafted by “heaven’s breath”.

As I went over and over the lines, and played through the role many times in rehearsal, I developed a feeling for the moment that resonated well with the rest of the play. The Porter explicitly welcomes three characters into his make-believe Hell. The first two might be the source of news and gossip – a suicide and a religiously motivated traitor who used Jesuit techniques of mental reservation to unsuccessfully try to win acquittal from an Anglican court. But the third one’s sin is so slight – just skimping a little on the advertised quality of goods (“an English tailor come hither for stealing out of a French hose”) — that it might never have been noticed, yet  so common that very few businessmen would be free from its guilt. Here the Porter begins to make the audience uncomfortable. Immersed in the horrendous evil of the murder of Duncan, they naturally would condemn the Macbeths and instinctively flee in horror from their sin. But the Porter points out that Hell is the final resting place not only for horrific betrayers but also for petty thieves. And though he does not go on, the Porter makes calls out “all the professions that go the primrose way to the everlasting bonfire.”

The Porter is funny, and laughs himself as he pretends to welcome others into Hell. In his interchange with Macduff, he shows himself to be a prime candidate for hellgate. He jokes about lechery and drunkenness, but shows himself guilty of them. Unwittingly, he shows himself to be as much a victim of the equivocating fiend as Macbeth. We laugh with him and at him, but he disturbs our comfort – are we also losing our everlasting soul to the deceptions of the devil? Will we join Macbeth the “hell-hound”? Will we discover with Lady Macbeth that “Hell is murky?” The Porter must begin to — Shakeespeare gives no direction for the Porter to exit, so he must suffer the news of Duncan’s murder through his drunken haze.