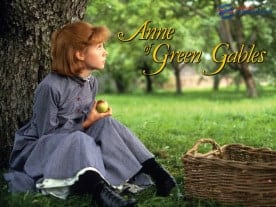 This disturbing article about Netflix’s new Anne of Green Gables series by AnnaMussmann hit me close to home. I did not discover Lucy Montgomery’s works until I was an adult on the verge of marriage, but as a romantic I was deeply moved by the 1985 miniseries. I read the entire series to my wife during my graduate school days in Toronto, and to my children when they were old enough to enjoy them. So I join many who will hate anyone who dares to smear this idyllic character.

Mussmann uses the opportunity to reflect upon the importance of idyllic literature for forming the young imagination:

The thing is, children imagine themselves capable of stupendously unlikely deeds….Children read books and see themselves among the heroes. In their hearts, most children are sure “I would have slain the monster.” “I would have freed the slaves.” “I would have defied the lions and died for my faith.” This is an excellent thing, because yearning after what is good plays a crucial role in developing the moral imagination that will shape their future lives and choices.

[restrict]
This also hits close to home.  When I was young, I was completely unsheltered. Drugs, gangs, pornography, swearing were daily fare. I loved to escape from it all through stories such as The Lord of the Rings and movies like Star Wars celebrated all the values I missed in real life. And they had a profound effect on me. I wanted to be someone who could meet Sam or Aragorn or Gandalf and live up to their expectations. So I refused to imitate the real life around me.

If Mussmann is right, Netflix joins a contemporary effort to eliminate hope for a more innocent world from the hearts of our young.

s as if they intend to destroy the power of old books and old stories to challenge a postmodern worldview by delivering diluted, re-imagined versions that function as an inoculation. It is almost as if they want to keep us from recognizing that not all beliefs, values, time periods, and stories are the same as ours, lest we begin to question what we have been taught.

I hope that they will realize the justice of Our Lord’s warning:

Whoever causes one of these little ones who believe in me to sin,[a] it would be better for him to have a great millstone fastened round his neck and to be drowned in the depth of the sea.