Biographies and Autobiographies: Lives of and by the Saints 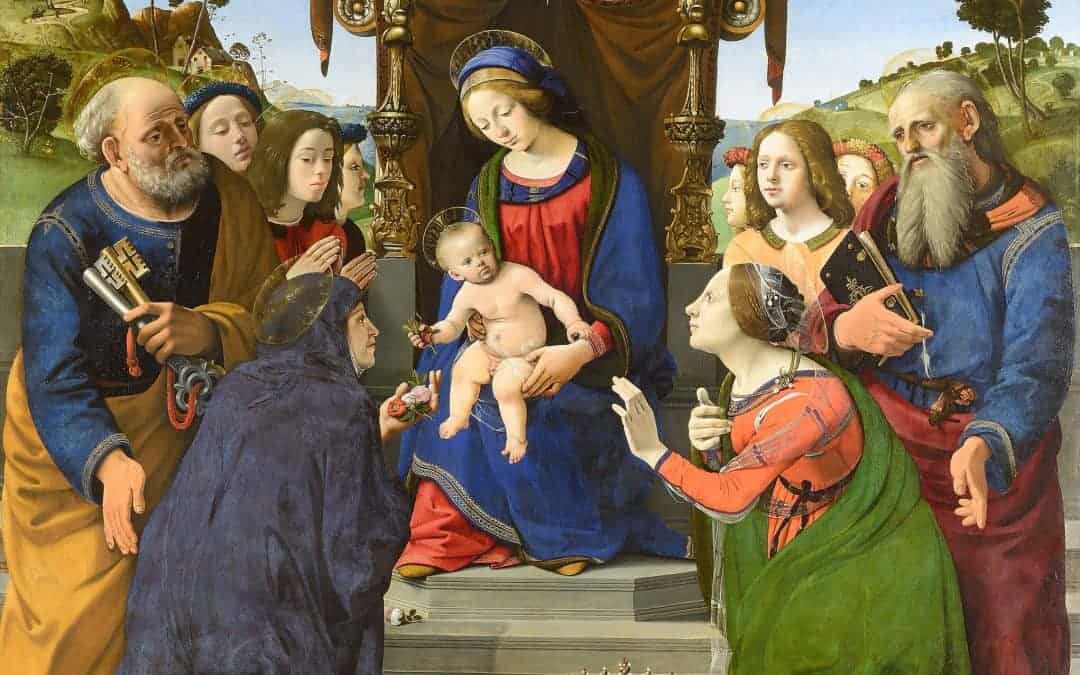 Rev. Joseph W. Koterski, S.J., is a member of the Philosophy Department at Fordham University, where he has taught since his ordination as a Catholic priest in1992. At Fordham he also serves as the Editor­-in­-Chief of International Philosophical Quarterly and as Master of Queen’s Court Residential College for Freshmen. In 2011 he was re­elected to a second term as the President of the Fellowship of Catholic Scholars. He regularly teaches courses on natural law ethics and on medieval philosophy. He has produced videotaped lecture­ courses on “Aristotle’s Ethics,” on “Natural Law and Human Nature,” and on “Biblical Wisdom Literature” for The Teaching Company, and most recently one on “St John Paul II’s Veritatis Splendor” for the International Catholic University. In addition to publishing various articles and book chapters, he has authored a monograph entitled An Introduction to Medieval Philosophy: Basic Concepts (Wiley­Blackwell, 2009).

​    Christian holiness always involves imitating Christ. The saints have their holiness from such imitation. But the great variety of saints shows us the many routes to this holiness.  What do the lives of saintly people tell us about their search for God and their efforts to conform their hearts to the divine will?
​
We can learn much from reading the lives of the saints – both what they themselves say and what others report about them. Happily, for many of them there is a considerable range of material that has come down to us about the stories of their lives. In a few cases their biographies were written by individuals who have also been recognized as saints. And there are a certain number of autobiographies.Some of these accounts are clearly more suitable for the inspiration of children, and some for teenagers and young people. Some appear to have a general readership in mind, and some are for highly specialized audiences. In looking through this vast body of writings, one cannot help but admit that some hagiographical accounts present the life of the person in ways that simply seem unreal – as though the individual never failed and never sinned. Other writings bring out well the challenges and the difficulties that the saint experienced, and even the failures along the way.  There are also considerable differences in the tastes of one period that make it hard to read what seemed perfectly natural at another time.

Within the genre of biography, autobiography is a special type. We hope for accuracy, objectivity, and balance from a biographer, but unless there are diaries or other spiritual writings from the individual who is the subject of the account, it is much harder to know for sure what was taking place within the person. The genre of autobiography allows, and in fact, encourages more self-disclosure. To be sure, it is not that the genre is immune to deception and misrepresentation, but here the factor of real sanctity works in favor of the reader. Where the autobiography of a worldly person could well be devised in such a way as to leave a certain impression, regardless of its truth, the true saint who writes knows that the most important witness is the Lord, and has ever reason to tell the truth.

Were this a court of law, there would be reason to be suspicious. No one thinks it wise to let the accused be the judge in his own case. The temptation to excuse oneself of crime would be overwhelming. Were it a court of public opinion, there would be reason to presume special treatment. No one thinks it wise to let a writer review his own books, or to let a contestant judge her own dance routine. The inclination to overlook errors and to laud one’s own virtues would easily triumph.

But we relish the stories of the saints who have left us some record of their lives. There is something about autobiographical writing that adds a new dimension to the service that a good biography renders when it provides a chronicle of acts and events, an explanation of the circumstances and setting, and the sort of judgment that a bit of temporal distance, plus ready access to documents and outcomes, makes possible. Instead of the temptation experienced by some biographers to clean things up and perhaps to restrict the account out of a well-meaning desire to “say only the good things that men need to hear,” the saints often make out of their autobiographies a prayer for God’s mercies and a request to the reader to join them in prayer.

The author of an autobiography does need to face the question that any of us face when asked to tell our stories.  Most of the time we tell some highly edited version of our lives, and this is probably prudent.  There are things that should not be known indiscriminately by all when a person is still alive, for one is still on one’s pilgrimage, still needing to make choices, still needing to grow in holiness.  But in recounting the whole of a life, especially when the account is only to be made public after death, it is important not to present holiness as if it were a static state, something already in place from birth or conception. The life of the Immaculate Virgin Mary alone could claim that her growth in holiness never involved sin.  The rest of us need much work, much prayer, much grace to attain holiness.

This short essay is intended to be the first of a series that will consider a range of such spiritual  autobiographies. In this series I will be focusing on autobiographies, even if there are many good things to be learned by reading biographies, precisely because of the revelation of the interior life and its struggles by the saints themselves. My hope is that placing distinctions like those made above before the reader will be helpful when choosing what to read and that it will also be useful to have identified for the reader some points of special note and some questions to consider.

Let us begin with just one case, Story of a Soul by St. Thérèse of Lisieux. St. Thérèse of the Child Jesus, as she was known in religious life, sought to teach people her “little way” — the way of spiritual childhood, of trust and absolute surrender. Before her death on September 30, 1897, she wrote out an account of her life at the directive of her superiors.  The book itself has an interesting history. The account of her life was long known from the version that was edited by her blood sister, Sister Marie. It was first published in 1898.  More recent editions and translations generally try to be faithful to this text, but at the same time they now are sure to include materials from the pen of Thérèse that are a crucial part of her story but that were not included in that first version. This may well be a case of an editor trying to guide the process of how Thérèse came to be known and to protect some readers from what might have perplexed them.

There are many editions, but a highly reliable one is this: St. Thérèse of Lisieux. Histoire d’une Ame: Manuscrits autobiographiques (Paris: Editions due Cerf – Desclée de Brouwer, 1972). In English, Story of a Soul: The Autobiography of St. Therèse of Lisieux, a new translation from the original manuscripts by John Clarke, O.C.D.  (Washington, D.C.: Institute of Carmelite Studies, 1975). It has three parts.

Chapters 1 to 8 come from Manuscript A [1895] and were written under the command of Mother Agnes of Jesus, Thérèse’s older sister Pauline, who was prioress of their Carmel from 1893 to 1896. In this part we find her childhood memories, and they may be divided into three periods: (1) from her first memories through the death of her mother on August 28, 1877; (2) the next nine years, marked especially by tears and much sensitiveness, including the five years she spent at a Benedictine Abbey as a day-boarder and the account of the special grace that she received on Christmas night in 1885 that changed her character completely; and (3) her trip to Rome and her subsequent entrance into Carmel, including the Act of Oblation on June 9, 1895 by which she surrendered totally to God’s merciful love.

Chapter 9 comes from Manuscript B [1896]. It was addressed to Sister Marie of the Sacred Heart, who had asked her during her last retreat (September 1896) to put her doctrine into writing, especially in light of their conviction about the imminence of her death as the result of the dream that Thérèse had on May 10, 1896, in which she received confirmation that her end was approaching.

Chapters 10 and 11 are from Manuscript C [1897] and are addressed to Mother Marie de Gonzague, who was elected Prioress on March 21, 1896. At the urging of Thérèse’s sister Agnes, Mother Marie de Gonzague directed Thérèse to continue her writing and to include something about her religious life. There is much here about the spiritual lights that she had on various scripture passages, and especially on the virtue of charity and her great trial of faith. In addition, there is a prologue, an epilogue and three appendices: (1) the text of a letter that Thérèse always carried on her heart, (2) her Act of Oblation to Merciful Love, and (3) a chronology of her life.

The initial publication of this material in 1898 used various editorial changes that were made by Mother Agnes as authorized by Thérèse herself. This edition gives the impression that all three manuscripts were addressed to Mother Marie de Gonzague, but after the Diocesan Process of 1910, all subsequent editions are supposed to indicate the individuals to whom each of the manuscripts was actually directed.  As the result of a scholarly demand by theologians, the Very Reverend Marie-Eugène, Definitor General of the Carmelite Order, directed that her original manuscripts be published without the editorial changes, and a photostatic publication was printed in 1957 as Sainte Thérèse de l’enfant Jésus – Manuscrits autobiographiques. It is a stark sort of book, with no additions, no deletions, nearly no paragraphs, no division into chapters, no prologue, no epilogue.  From 1973 on there has been a tendency to produce hybrid versions that combine fidelity to the original text of Thérèse as well as reference to the 1898 edition that Mother Agnes had envisioned as a complete biography of her sister for the ordinary reader.

My purpose in providing the technical details of this account is not to retell the story here, but to encourage readers to read for themselves what this saint herself wrote.  It has inspired many. Let me be content here to make three points to watch for. (1) There is a crucial moment in her life – a special grace that she received on Christmas night that made clear to her that real sanctity involved a profound surrender, that she was no longer merely to live for herself, but for Jesus.  (2) There are fascinating presentations throughout of her spirituality – her doctrine, if you will: the little way. It would be difficult to imagine anyone who really pays attention to these texts not wanting to embrace this doctrine for oneself.  (3) And there are temptations that one would not expect – temptations to atheism, temptations to reject what she had earlier experienced as if it were a sham, as if the whole thing were concocted and untrue.

It is not unusual, of course, that desolations come to a person. And when they do, one of the tricks of the devil is to encourage the notion that previous consolations were nothing more than creatures of our own imagination. At this point, faith is sorely tested.  At this point we see that not all grace is felt grace.  But by Thérèse’s resilience we see that God’s grace is always there, even when we cannot see it.  Of these matters Thérèse wrote with great honesty, in ways that no biographer ever could.  We have a classic of spiritual autobiography, worthy of our attention and prayer.