When Edward and Michelle Trudeau’s daughter, Anya, enrolled in St. Jerome Academy’s sixth grade after years of classical homeschooling, she was a bit nervous about her first standardized test. The format was alien to her. As her parents tell it, they did not know what to expect when they arrived at school to pick her up afterwards. Anya’s reaction, however, captures a stark reality from a child who had been taught to think well: “Mom, it was so easy! All the answers were on the test!”

This is an indictment of the primary tool of modern education: the multiple-choice test. Introduced a century ago for its utility and affordability, it was designed for mass measurement with no regard for its affect on students. Today the multiple-choice test dominates education. Many teachers unsuspectingly include it in classroom assessment. A closer look, however, reveals this format as the Trojan Horse of education; it not only has forced curricula to bow to the dictates of high-stakes testing, but also has invaded the very process of thinking and learning.

A multiple-choice question merely asks a student to take a 25 percent chance of recognizing the right answer. By contrast, asking a student to write or say even one sentence on a given topic asks her to recollect (re-collect) what she knows, form a thought about it, and express it in a comprehensible way.

Thought and language cannot be separated. We reason with words. The most striking distinction of a classical liberal arts approach to education is its vibrant use of language: discussion, speaking, listening, questioning, reading, reciting, retelling, re-enacting, debating, and delivering speeches. Frequent writing deserves a central role, because it requires more focus and precision. Thinking is unavoidable in all these activities, and therefore, students are naturally engaged. Thinking happens to be fun.

Language is the vehicle that drives us to continually refine our perception of what is true. Nouns name things, either rightly or wrongly. Sentences declare order and relationships that either correspond to, or misrepresent, reality. The very act of constructing a sentence, spoken or written, coaxes the mind to see, to order, and to communicate a truth or idea. This is not a matter for grammar class alone. Every time a student expresses knowledge in complete sentences (including mathematical sentences in symbols), she builds her capacity for reason and understanding. Filling in bubbles, blanks, word searches, and true/false boxes robs her of that opportunity.

Therefore, the very form of these Industrial Age assessment techniques perpetuates the fragmentation of modern learning; they portray reality as isolated facts without meaning or relationship. They dull the mind to the active search for true understanding and to the joy of discovery. Further, isolated facts live only in short-term memory. They have not been woven into one’s grasp of the nature, the purpose, and the connections between all that is.

Language is the tool that connects and illuminates the facts. True education recognizes that the mastery of language is the foundation for lifelong learning and true freedom. For centuries, the arts of language known as the Trivium (grammar, logic, and rhetoric) formed the basis of all liberal learning. In her classic 1937 book on the subject, Sister Miriam Joseph, C.S.C., Ph.D, writes:

In true liberal education, as [Blessed John Henry Cardinal] Newman explained, the essential activity of the student is to relate the facts learned into a unified, organic whole, to assimilate them as the body assimilates food from the soil and increases in size, vitality, and beauty. A learner must use mental hooks and eyes to join the facts together form a significant whole. This makes learning easier, more interesting, and much more valuable. The accumulation of facts is mere information and is not worthy to be called education since it burdens the mind and stultifies it instead of developing, enlightening, and perfecting it.

We assess what we value. If we value a young person’s growing ability to think and to judge what is right and true, we must give each one a chance to do so with our constant guidance. All assessment should serve the good of the student. Modern education, with its relentless measurement of student output, entirely misses the point. Yes, the retention of facts is important, but it is not an end in itself; and even here, having the student write the answers for himself cultivates the faculty of memory in a way multiple choice tests never can. But teachers want to understand clearly that they must also test a student’s ability to weave those remembered facts together to invite wisdom. We learn about the world around us so we can understand reality and conform ourselves to what is true, good, and beautiful.

The accompanying photo demonstrates a disastrous misuse of assessment in one highly regarded Catholic school: 904 grades given to one middle-school student in one academic year, almost entirely though objective instruments with very little writing component. 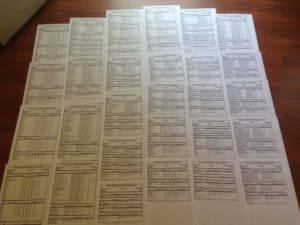 The sheer volume and the nature of this kind of quantification through constant daily testing, crushes both teacher and student. Not everything demands a grade. Further, “objective” tests are not always so. Any evaluation reflects not just the student’s ability to learn but also the teacher’s ability to convey an idea or a skill. In addition, poorly worded questions can evoke wrong answers and frustration from a child who might otherwise be happy to share all he knows about, for example, the three types of soil. Ask him to write three paragraphs instead. Yes, that will require judgment on the part of the teacher, but the exercise will be a far greater good to the student.

Properly understood, assessment is not a nerve-wracking obstacle to be faced, but an essential step to gather, to process, and to share what is known. “The test and proof of the teaching done – the finishing and fastening process – must be a re-viewing, re-thinking, re-knowing, and a re-producing of the knowledge taught,” writes John Milton Gregory in his important 1886 book, The Seven Laws of Teaching. What is now popularly known as “soft assessment” happens constantly in classical liberal arts education. It is called the relationship between teacher and student, and it grows through the constant feedback of dynamic dialectical learning. That vital relationship, which St. John Bosco saw as the heart of education, breaks down when a teacher’s time is consumed by excessive documentation. With greater knowledge of each student, teachers become more comfortable making judgments about whether mastery has been attained because there is constant evaluation in the give-and take of the classroom. In classical learning, formal assessments tend to bring less anxiety because the ideas and skills have been deeply explored, clarified, and integrated. Daily, students are being taught to think well as they speak frequently and write fluidly. Assessment turns out to be the icing on the cake.