Why Music Should Be Part of Every Catholic Child’s Education

Imagine finding yourself at St. Peter’s Basilica in Rome with someone who is simply bored with the whole thing and can’t wait to get back to the hotel to watch TV. You would no doubt be annoyed, but also disturbed that the person coul 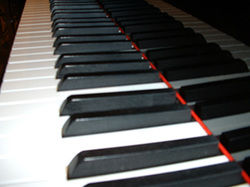 d be unmoved by so much beauty, history and religious grandeur. This is the way I frequently feel when I see a young person bored by the amazing wealth of the musical tradition of the West. What a sad state for students who can only find enjoyment in the latest Pop-corn or even the Beatles!

Musical tastes are formed early, so developing a healthy musical life should be a priority for Catholic elementary schools. Before students are fixed in likes and dislikes, before they care about cool and uncool, they are very open to the naturally delightful sounds of Mozart, the intricacies of Bach, the rich layers of Palestrina. Of course, they won’t sit still to hear very long pieces, but shorter pieces, such as Mozart’s Turkish March or Palestrina’s Sicut Cervus, will engage their attention. Gilbert and Sullivan’s musical comedies have delighted my kids so much that they know most of the lyrics by heart. [restrict]Many pieces of classical music are exciting to act out; I remember having loads of fun with kids as we played to Tchaichowsky’s 1812 Overture or almost anything by Rossini (or http://www.youtube.com/watch?v=c7O91GDWGPU).

Involving children in singing is even more important than introducing them to great music. My second grade teacher, Sister Mary Carmela, would lead the whole class in practicing the hymns for Mass, which began a lifelong love of singing for me. I learned some of my favorites, such as “Sing of Mary”, by heart, and would often sing them when I was alone (not with others around, of course). Although I wandered in my faith and I didn’t join a parish choir until graduate school, the hymns I learned as a boy stayed with me.

Even at the collegiate level, my first goal as a teacher of music is to develop a taste for a breadth of good music, especially for the most excellent, and for singing. For most, learning to sing in harmony is really exciting, and they frequently ask to sing more than I require.

Traditionally, music has been considered a central component of a general education. It forms the spirit and begins to open the mind. I begin to get students to think about music by helping students to notice and describe the differences among kinds of music. Andrew Pudewa, director of the Institute for Excellence in Writing, has a wonderful presentation on the effects of different kinds of music on human development.

He points out the importance of distinguishing “like or dislike” from “what is it like” questions. The young are deeply defensive of criticisms of the kind of music they like. As teachers, we need to help them move beyond describing music by such subjective adjectives as “fun” or “boring”, or even “beautiful” to being able to distinguish “syncopated” from “melodic”, “tense” from “relaxed”, “satisfying” from “longing” music. As learning to recognize constellations in the night sky and distinguish planets from stars opens a whole new world of experience, so students are opened to a richer lifetime of musical experience by learning to hear, for example, “resolution” in a piece of music. Understanding that Gregorian chant deliberately limits its use of resolution (along with metrical regularity) helps them see why chant is not immediately exciting and yet is especially appropriate for liturgical celebration.

Older students are able to move on to the next stage of musical education, which involves learning the techniques composers use to bring about different musical effects. Chords, scales, modes, keys, modulation are terms appropriate to this stage of music theory and help explain why different pieces of music sound the way they do. Gregorian chant and much folk music are “modal” (emphasizing steps of the scale other than “doh”), polyphonic music blends independent melody lines into rich sounding chords, classical and contemporary music emphasizes chordal progressions, contemporary music elevates rhythm over melody. Although this sounds complicated, elementary music theory is much easier to grasp than chemistry or advanced algebra, and will mean more to most students in their adult lives than either science or math.

By this time, my students have come to learn that music is not simply emotional, it’s intelligible! We can come to understand something of why different kinds of music affect us the way they do. This teaches them a lesson of fundamental importance—our emotions are understandable and controllable, a tremendous moral discovery. With this discovery, they can know better why most philosophers have considered music to be so important in our moral and even political life.

The final stage of musical education makes an even more dramatic revelation—our emotions respond to mathematics! According to legend, Pythagoras, the ancient Greek mathematician/philosopher, discovered this remarkable fact when he heard blacksmiths hammering musical intervals with their different sized hammers. Upon weighing the hammers, he learned that different weight ratios (2:1, 3:2, 4:3) correspond to different intervals, and that the simpler the ratio or fraction, the more pleasant the sound. This began an amazing series of discoveries showing that mathematics lies at the root of our enjoyment (or lack thereof) of music, and the belief that the natural and human worlds are fundamentally works of reason (Logos).

Musical education has always been considered one of the chief components of an education. Developing tastes, discerning differences, understanding basic composition, and introducing mathematics should be a part of every Catholic student’s education. As Pope Benedict recently said:

If faith is alive, Christian culture does not become a thing of the past. Cathedrals are not medieval monuments, but places where we can meet God and one another. Great music—Gregorian chants, Bach, Mozart—are not things of the past.

Catholic schools must make sure that Christian culture continues to live in the souls of the Catholic young.
[/restrict]