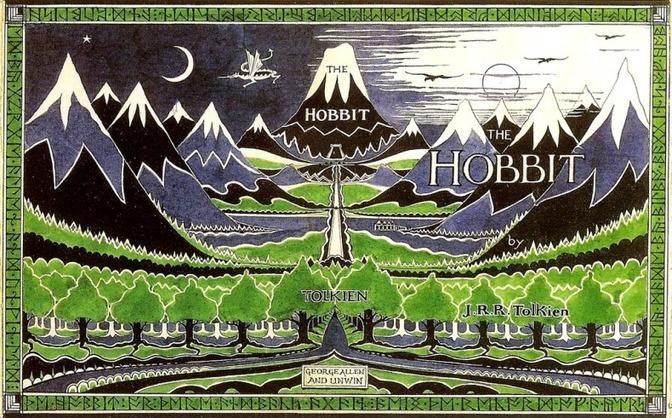 J.R.R. Tolkien once suggested that the great desire of Elves was to realize “imagined wonder” so powerfully that they and their hearers could almost forget the story wasn’t real. Many readers, especially the young, find themselves gripped almost that powerfully by books they read. Such experiences have powerful effects on taste, desire, and moral judgment.

As a youth, I was one enchanted by Tolkien’s works. I devoured The Hobbit and The Lord of the Rings, reading them often enough to lay down scenes and words firmly in my memory. That was a time when God had little place in my heart, and the Catholic faith seemed a burden and an embarrassment. But Tolkien’s sense of adventure, his stories of great struggles that succeeded against impossible odds captured my heart and excited my imagination. Though I didn’t know it at the time, all of his imagined wonders were deeply formed by the Catholic faith he loved from his youth, enriched by immersion in Medieval chivalry and Arthurian legend, blended with a deep appreciation for the noble and parochial aspects of English yeomanry. It was a powerful blend, calculated to inspire a longing for great deeds beyond the ordinary, comfortable, stable, and safe life promised to those who devoted themselves to lucrative careers. That longing for an imagined ideal prepared me to embrace Catholicism as the highest and most real kind of romance.

Tolkien made adventure attractive. But he also warned that leaving comfort and striving for greatness involves hard labor and difficult choices, and brings about deep changes in the character of those who pursue it. Those who leave home never return the same.

“This is the story of how a Baggins had an adventure, and found himself doing and saying things altogether unexpected. He may have lost the neighbors’ respect, but he gained well, you will see whether he gained anything in the end.”

Having felt the spell cast by The Hobbit and the Lord of the Rings, I was also ready to respond to Our Lord’s words about the cost of discipleship ­­ “all your heart, all your soul, all your mind”. Similarly, many young Catholics, formed by the spirit of Tolkien’s work, responded with enthusiasm to one of the most quotable lines from Pope Benedict: “The ways of the Lord are not comfortable, but we were not for comfort, but for greatness, for good.”

Tolkien awakened the desire to exert great effort to do great deeds, but also imbued his works with a love of humility and fear of self-­importance. The hobbits do become great, but only because they respond willingly to the terrifying tasks they are called upon to do. And their strength comes from the way they never cease to recognize their own littleness. Bilbo, Frodo and Sam all face the most difficult decision of taking up tasks they know are beyond their power. “At last, with an effort, [Frodo] spoke, and wondered to hear his own words, as if some other will was using his small voice. ‘I will take the Ring,’ he said, ‘though I do not know the way.’” **

Catholicism is, as Bishop Barron following G.K. Chesterton has said, a “Both/And” religion. Aspiration to greatness coupled with deep humility is a seeming paradox. Tolkien marries these two opposites through a strong sense of trust in Providence. Immediately after Frodo offers to take up the impossible task, Elrond expresses the central wisdom of Tolkien’s adventurous spirit: “‘If I understand aright all that I have heard, I think that this task is appointed for you, Frodo; and that if you do not find a way, no one will. This is the hour of the Shire­folk, when they arise from their quiet fields to shake the towers and counsels of the Great.” Elrond then shows that even the greatness of the Great is rooted in their wise submission to the surprises offered by Providence: “Who of all the Wise could have foreseen it? Or, if they are wise, why should they expect to know it, until the hour has struck?”

Confidence in Providence is central to Tolkien’s whole imagination of the worth of adventure in fulfillment of duty. The story of the Ring, ­its finding, its threat, its promise ­­ is intertwined with Providence. Gandalf recalls the uncanny character of his meeting with Thorin, which led to finding of the Ring and the destruction of the dragon: “A chance­meeting as we say in Middle-earth.” The Ring is a threat; Sauron seeks it to subdue Middle­earth completely and without hope. But Gandalf sees Providence in the way the Ring is found: “Behind that, there was something else at work, beyond any design of the Ring­maker. I can put it no plainer than by saying that Bilbo was meant to find the Ring, and not by its maker. In which case, you [Frodo] also were meant to have it. And that may be a comforting thought.” Frodo, overwhelmed by the fear of having come to the attention of Sauron, cannot take comfort in being chosen. But he does submit to having been chosen. Later, a strong sense of Providence brings comfort Sam. Leading Frodo through Mordor itself, he sees a beautiful star, and realizes that the shadow of evil can never obscure all beauty. “Now for a moment his own fate and even his master’s ceased to trouble him…and putting away all fear he cast himself into a deep untroubled sleep.” Though they might fail, and Sauron recover the Ring, the victory will always fundamentally be on the side of beauty and goodness.

Finally, the Ring is destroyed, but not by Frodo or Sam. In the end, Gollum is the unlikely instrument chosen to bring about the Ring’s destruction and salvage the Quest from ultimate disaster. “But for him, I could not have destroyed the Ring. The Quest would have been in vain, even at the bitter end. So let us forgive him, Sam!” Providence, ­­ guiding all, using all, overall ­­ brings about the successful fulfillment of the Quest.

Tolkien is also remarkable for making mercy, the greatest of virtues, spiritually attractive. Without pity and mercy, the particular designs of Providence would be frustrated. Bilbo, Frodo, and Sam all discover pity and exercise mercy when faced with Gollum. When first he hears that Gandalf had let Gollum live, Frodo is aghast; he never could understand why Bilbo didn’t kill him when he had the chance. But when he sees Gollum, he does pity him. After having experienced for himself the lure and spiritual burden of the Ring, Frodo can begin to understand and connect with the heart of the worst sinner he could ever imagine. Addressing the memory of Gandalf, Frodo says, “I am afraid. And yet, as you see, I will not touch the creature. For now that I see him, I do pity him.”

Sam’s change is even more remarkable. He despised Gollum, and, in the most tragic moment of the trilogy, his suspicious accusations prevent a worn­out Gollum from repenting of his plan to lead the pair to Shelob’s Lair. Having escaped Shelob, but thinking his master dead, Sam’s one personal desire is to wreak vengeance upon Gollum. But he recognizes that, impossible as it seems, he has now been chosen to bear the Ring to Mordor. Submitting to that burden out of humble obedience profoundly changes him, so that when his opportunity for vengeance at last comes, he lets it pass by.

“Sam’s hand wavered. His mind was hot with wrath and the memory of evil. It would be just to slay this treacherous, murderous creature, just and many times deserved; and also it seemed the only safe thing to do. But deep in his heart there was something that restrained him: he could not strike this thing lying in the dust, forlorn, ruinous, utterly wretched. He himself, though only for a little while, had borne the Ring, and now dimly he guessed the agony of Gollum’s shriveled mind and body, enslaved to that Ring, unable to find peace or relief ever in life again.”

The Lord of the Rings ends triumphantly, making the reader feel eucatastrophically with Sam that “everything sad is going to come untrue.” And we believe it will. But not in this life. Humbly submitting to Providential duty often ends sadly as far as we can tell. The Silmarillion shows Tolkien’s Catholic imagination did not fear sadness, and has helped me endure many sadnesses in my Catholic life.

Recently, meditating on the doctrine of the Holy Trinity at Mass on Trinity Sunday, I felt a familiar nostalgic pang. The more I come to love the Church, her teachings, her life, her history, the more I wish that her beauty could be shared with the world. And yet it seems always to be a fight, in which the Church so often gets in her own way, with heresy, scandal, and indifference making those outside and inside hostile to what is in itself so beautiful and true and good. And in the midst of my sadness, I felt that Tolkien must have felt it deeply, too, for he captured it perfectly in his poetic description of the battle between the Elven Lord, Finrod Felagund, and Sauron, who at the time was the demonic lieutenant of the Satanic Morgoth.

Felagund had set aside his crown and throne to fulfill an oath to help Beren, a great human hero. They traveled in disguise as orcs, but Sauron challenged them, and tried to strip off their disguises. Tolkien imagined their personal encounter as a battle of songs of power. Each drew power from what he admired, what he lived for. Sauron sang of betrayal and treachery, Felagund of faith and trust. Running out of power, Felagund drew on the beautiful memories of Elvenhome across the sea, where faith and trust and friendship ruled.

The chanting swelled, Felagund fought,
And all the magic and might he brought
Of Elvenesse into his words.
Then sudden Felagund there swaying
Sang in answer a song of staying,
Resisting, battling against power,
Of secrets kept, strength like a tower,
And trust unbroken, freedom, escape.

But Sauron countered with the Elves own faithless betrayal of their kin, whom they had killed to further their rebellion against the divinely appointed angelic powers.

Then the gloom gathered; darkness growing
In Valinor, the red blood flowing
Beside the Sea, where the Noldor slew
The Foamriders, and stealing drew
Their white ships with their white sails
From lamplit havens.

The noble Felagund, living and upholding the highest ideals of faith and friendship, is defeated by the memory of his own people’s failings.

And Finrod fell before the throne.

This was not the end of the story ­­ Finrod’s sacrifice allowed Beren to fulfill his quest ­­but Finrod was lost to Middle ­earth forever.

In so many ways, Tolkien’s imagination not only captured my heart, but molded it, allowing me to imagine a moral universe beyond any that I encountered in the secular culture I breathed.

When at last grace found me, it did not find me unprepared. I was completely ready to embrace its spiritual beauties of the longings Tolkien’s world had aroused in it. And he continues to help me imagine the workings of Providence in the midst of my Catholic joys, trials and sorrows.