When John Pica took the helm of Saint Agatha Academy in Winchester,

Kentucky, seven years ago, the academic program at the school was neither broken nor struggling. He felt his own three children had received an excellent education and firm Catholic foundation at the pre-K through 8th grade school in a suburb of Lexington. After a 20-year career in higher education administration, Mr. Pica felt called to serve the Catholic school system. He had no intention of shaking up the curriculum.

A year later Rev. Frank Brawner arrived as the new pastor, and the two took a fresh look at the strengths and weaknesses of the school. Founded in 1919 by the Sisters of Divine Providence, Saint Agatha Academy is a small institution whose long history has had a big impact in the region. As with many Catholic schools across the

country, enrollment was down from its peak of about 200 in the late 1990s but was holding steady at about 135-140.[restrict] Still, retention concerns were beginning to arise as parents explored competing middle school programs and magnet schools. But Mr. Pica, whose background was in collegiate liberal arts programs, knew that the Church’s own tradition offered something richer and more distinctive than any possible competition.

“We asked ourselves, ‘How can we create an academic program that is both distinctive and distinguished, which parents recognize as unique–and unavailable elsewhere?’,” Pica said. “We saw it as an opportunity to enhance our school culture. We always had a very strong Catholic identity, but [a classical liberal arts approach] was a way to enhance it even beyond where we had been.”

Not a single one of the existing teachers had the benefit of a classical education, but that was not seen as an obstacle. Mr. Pica and Fr. Brawner felt strongly that their first responsibility was to mentor the faculty, helping them appreciate the personal and professional rewards of lifelong education for themselves. They spent time, effort, and resources to help teachers imagine the richer classroom experience they could create for themselves and their students.

Mrs. Susan Wallace was a 26-year veteran teacher at Saint Agatha when this idea was introduced. “I was intrigued, but petrified,” she said, adding that she had withstood every educational fad in her decades of teaching. Immediately, however, she knew this was different.

“This is the first time it has felt real,” she said. “What we are doing is hitting home with our students, our staff, and our parents. It is really incredible.” She added, “There is an excitement in my students about learning–and an excitement in my colleagues about teaching–that had not been present ever before.”

Mrs. Wallace, who serves as chair of the school’s Elementary Division, points out that adopting a classical approach does not mean exchanging one set of books for another; teachers must “internalize” the change. “There is always that little bit of resistance: ‘I just want you to hand me the material and tell me what I need to do.’ [The freedom] is a challenging leap for some people, especially if they have gone through public education and public school teaching.” She cited a former local public school superintendent who wanted every child on the same page, in the same book, every day in all his schools. “How did we get to this point?” she asked.

By contrast, Mrs. Wallace and her fellow teachers are encouraged to develop their own approach, especially in history and literature. She has no textbook. She uses 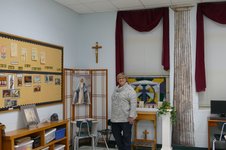 no worksheets. Her second grade class is immersed in the stories of Ancient Rome. They discuss and act out the drama of history while sporting togas. They finished the Punic Wars before Christmas, drawing pictures of Hannibal and his elephants crossing the Alps. When they memorize Mark Antony’s funeral oration from Shakespeare’s Julius Caesar, they have a rousing discussion of what “ambition” means. Right now they are coming to the end of the Roman Republic. “The kids are happy to be Roman until the sinning begins!” she adds with a laugh. She does not emphasize testing in history, but the third grade teacher reports that her former students can retell many stories from second grade.

Saint Agatha Academy spent a full 18 months preparing its teachers to adopt a classical liberal arts approach before its debut in the fall of 2013. Mr. Pica said this “stepwise” approach to helping teachers understand how to bring in the Good, the Beautiful, and the True was a key to the success of the transition. By the time it was presented to the parent community, the obvious enthusiasm of the teachers quickly won over public opinion. He added, “That right there made it possible for us to roll this out.”

“We did not lose one teacher as a result of this process,” he said. “They were all excited about the opportunity. There was not any resistance, I think because of the deliberate way in which we took the time to explain and explore classical education.”

Mr. Pica appointed core faculty leaders, sent teams to visit schools and attend ICLE conferences, delved into readings, and brought in consultants for training. From the outset, the pastor and principal had the blessing of the bishop and superintendent. So far, literature has been overhauled; ”unexciting” Social Studies has been eliminated in favor of the colorful, inspiring stories of history. The addition of Latin has been a successful surprise. Instead of hiring a Latin teacher, Fr. Brawner has been teaching the faculty Latin so they may incorporate it throughout the curriculum. In addition, the pastor has begun teaching seminar-style traditional Logic in the middle school.

Kathy Beauchamp, a 22-year veteran teacher and chair of the Middle School Division, said her biggest surprise was how much students of every age love Latin. They find words and connections everywhere. In addition, she said the Logic course has boosted students’ ability to write persuasive papers. They delight in picking out fallacies, and they also enjoy their newfound ability to diagram sentences.

Mrs. Beauchamp noted that the students are now making much stronger connections between subjects, and also between their studies and their lives. “We found, as Catholics, we could teach Church history in light of all the Church has done to form society, especially Western society. This is not something we just do on Sunday, but something intrinsic to our entire lives. We are all striving to be saints. We want to plant these seeds from the lives of the saints and the history of the Church.”

She said she has rediscovered her own love and desire to continue learning, especially in her study of Church history. “When our children see how excited we are about learning, they get excited themselves.”

The teachers’ renewed openness to learning means that they are neve

r quite satisfied with the status quo. “You have to be willing to change things every year,” said Mrs. Wallace. “You are never going to get overly comfortable again. And you do not want to be. You don’t want to be stale. We are always growing.”

She added, “Allowing your students to think and to question from the very beginning opens the door to all of this. Even the little ones need to think and question. Wonder creates the love of learning. We must realize how much is inside of them already.”

Mrs. Wallace continued, “They ask such good questions. I see a competence and a courage in them to speak out. Even if they don’t know, they are willing to take a chance.”

Over the next couple of years Saint Agatha Academy plans to incorporate more classical approaches to math and science, partly by including historical perspectives in these disciplines. Another future goal is to better develop seminar-style learning in the middle school.

Mr. Pica said that enrollment has risen 11 percent, while some Catholic schools have struggled to remain steady. Saint Agatha Academy has always been known for its strong Catholic identity.  It maintains a tradition of daily Rosary, noon Angelus, weekly Mass, and vigorous catechesis even though the school is 68 percent non-Catholic. Mr. Pica said the faithful culture and classical approach draw students from other faith traditions. A strong Montessori pre-K and kindergarten is an ideal launching pad for the classical curriculum.

As mainstream education grows ever more career-oriented, the principal notes that a student’s exposure to broad liberal arts education may be increasingly limited. His school aims to inspire students for lifelong learning at a very young age. Saint Agatha has found the freedom to do this within the existing educational structure.

“We are a state-accredited school,” Mr. Pica said. “We follow state standards but we do not allow them to define what and how we teach.” He said Saint Agatha Academy  maintains standardized test scores above the national average; measurables are still important to the parents and faculty. However, the school does not want to allow testing frequency and mandated standards to limit its identity as a classical academy.

“We don’t want to be afraid to offer the education that we never had,” said Mr. Pica.  “If a small school in Winchester, Kentucky that is 68 percent non-Catholic can do it, who can’t?”
[/restrict]