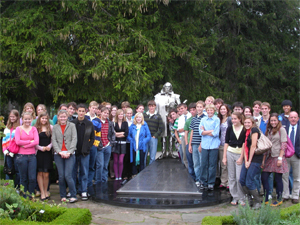 What is a mathematical girl like me doing in a place like this? Sometimes I ask that question as I sit in my office as Head of School at Aquinas Academy in Pittsburgh, PA. As a K – 12 independent Catholic school that is classical in nature, Aquinas Academy has a mathematician at the helm. Not that there’s anything wrong with that! It has worked well for the last six years as I have continued to grow in knowledge and appreciation of the elements of a classical liberal education in the Catholic tradition.

Aquinas Academy is an amazing success story. Founded in 1996 by a group of parents with a bold vision, Aquinas has grown from the 14 students who attended grades 5 through 8 in that initial year, to the 280 students and 33 faculty members who are present this year. With a mission statement that begins by recognizing parents as the primary educators of their children, Aquinas Academy has a classical focus. Instruction and discussion is geared appropriately at the Grammar (lower school), Logic (middle school), and Rhetoric (high school) stages to optimize student learning.

At the Grammar Level, there is a focus on providing students with rich opportunities in reading and literature, as well as the basic tools of arithmetic. We continue to explore avenues to enrich young students’ knowledge of history and historical figures within the context of the calendar year, the liturgical year, and references through literature. In these early years, it is also amazing to note student ability to assimilate a foreign language through daily exposure. In grades 1 through 5, the students have a daily visitor, as Senora Perry, the high school Spanish teacher, visits the lower school classrooms for ten minutes a day, playing games and conversing in Spanish for that brief period of time. There are plans to start to introduce Latin vocabulary in these early grades, too.

At the Logic Stage, Aquinas Academy faculty skillfully take advantage of the natural argumentative dispositions of the middle school students who learn to develop patterns of logic to justify their position on anything from a theological question to a scientific hypothesis. The middle school curriculum is enriched with good literature, strong history and geography, a deeper understanding of Church doctrine, and the study of Latin. Students also begin to develop their mathematical abilities through the study of algebra. The middle school is certainly a lively place to visit!

As students advance through the curriculum, they find the interrelatedness of the various disciplines. In grades 9 through 12, there is an intentional alignment of the history and the literature studied by students. Philosophy, theology, and Latin provide another link, making the study of the humanities rich and cohesive. Mathematics and science follow a traditional sequence, and the teachers in both of those disciplines work closely so that the mathematics supports the science. In every area, writing provides one means by which students wrestle with truth and human nature. When the questions are well-posed by faculty members, the classroom discussions spill into lunch conversations.

The strength of Aquinas Academy is in the faculty understanding of the elements of a classical curriculum. Although my own education was not classical in nature, my passion for mathematics and my understanding of its beauty and power led me to understand the importance of a deep, rich, liberal education. In addition to serving as the chief administrator of the school, I still find joy in teaching calculus to the senior class. Furthermore, I am surrounded by faculty members who hold the bar high for students to develop the higher thinking skills, as well as an appreciation for classical literature. As a school, we are also blessed to have Mass daily – which really is the cornerstone of a strong Catholic liberal education.

I have had the privilege of teaching at Aquinas Academy for the past ten years. When I was asked to take on the responsibilities of Head of School at Aquinas Academy six years ago, there was a degree of hesitation. For a school that was particularly strong in the humanities, that is not my background. However, I have learned over these years that a broad, liberal education is a philosophy of living and learning. It is not too late to broaden my understanding of the liberal arts and the history of western civilization. These lead to a rich understanding of our humanity and our dignity as such.

Once again, this summer, I had the opportunity to ask, “What is a mathematical girl like me doing in a place like this?” It was the middle of July, and I was beginning a risky week with many “humanities types” at the Academic Retreat sponsored by the Institute for Catholic Liberal Education. This was one more way for me to immerse myself in the things that make my own work unique. It was an opportunity to read, study, reflect, and share with others from across the country who shared a common vision of a Catholic liberal education. I found myself reading Shakespeare (in one night, no less!), discussing Plato, presenting Euclid’s Propositions (much more in my comfort zone!), and growing in my appreciation for western thought and Catholicism. What I have come to understand is that the mathematician in me is not in conflict with a classical education. As I continue to expand my knowledge in the humanities, I know that one can be well-versed in all of the liberal arts. And I might even propose that mathematics is among the higher of the liberal arts. After all, Galileo is credited with having noted, “Mathematics is the language with which God wrote the universe.” With that, I no longer really wonder why I am doing what I am doing for the students and families of Aquinas Academy!